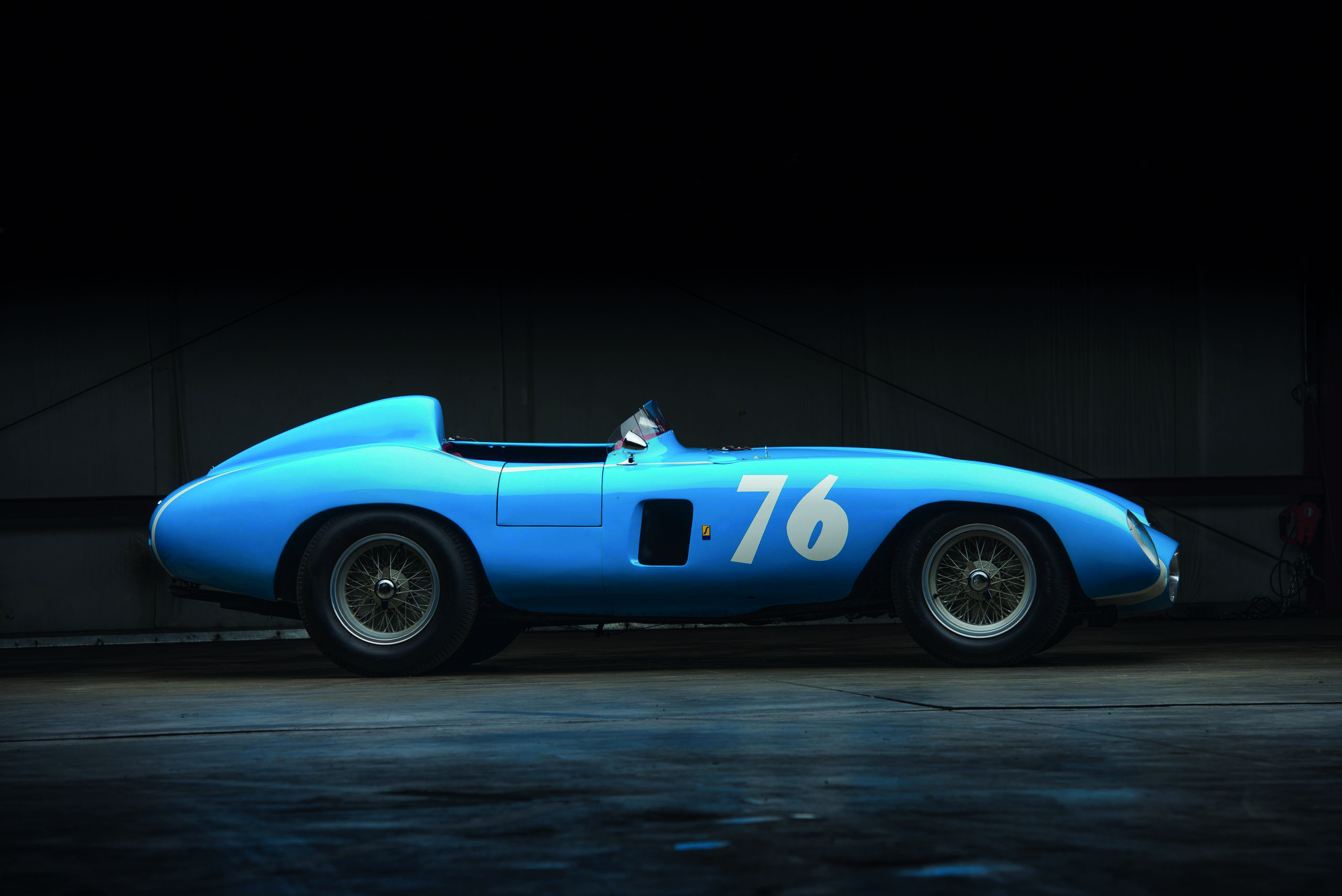 Evolving from one of Ferrari’s earliest four-cylinder engines, Ferrari’s straight-six, starting with the Type 114, eventually led to the potent 121 LM. With a rather hefty displacement of 4,412cc, this provided much more horsepower and torque than its predecessors. Fitted with three side-draft Weber carburetors, the engine produced a hearty 360 bhp. These were not numbers to scoff at, as this engine was over a liter larger in displacement and over one hundred horsepower more than Jaguar’s D-Type!
According to noted Ferrari historian Marcel Massini, the car presented here, chassis number 0546 LM was originally built as a 118 LM and later converted by the factory to 121 LM specification, the specification in which it is presented today. It is one of only two examples upgraded from 118 LM specification (the other being 0484 LM), and the third of four total 121 LMs constructed. Needless to say, these new six-cylinder Ferraris were all about speed, and their outright straight-line performance certainly put the likes of Mercedes-Benz and Jaguar on notice. This example’s first outing was at the 1955 Mille Miglia. Starting three minutes (and three entries) behind the iconic duo of Sir Stirling Moss and Dennis Jenkinson, who would race to overall victory in record time just over 10 hours later, 0546 LM was piloted by the respected Italian privateer Paolo Marzotto as a Scuderia Ferrari Works entry. However, the car did not finish the race, as a result of a blown tire at 174 mph during the first stage. Immediately thereafter, it was shipped back to the factory and upgraded to 121 LM specifcation. 0546 LM was one of the trio of 121 LMs that raced at the 1955 24 Hours of Le Mans, piloted by Maurice Trintignant and Harry Shell. Eugenio Castellotti, driving one of the sister cars, clocked the fastest lap time in practice and achieved a top speed of 181.15 mph on the straights.

On the speed of the 121s, Jaguar’s Mike Hawthorne commented that “The Ferrari’s brakes were not as good as ours, and their behavior on the corners was not all it might have been; but on acceleration, Castellotti just left us both standing, laying incredible long black track of molten rubber on the road as he roared away.” Despite their immense speed, reliability proved to be an issue and the car was forced to retire in the 10th hour with engine problems. At the end of its tenure with Scuderia Ferrari, chassis number 0546 LM passed to William Doheny, the CEO of Superior Oil, who sponsored Ernie McAfee as his driver for a handful of other cars, as well as the 121 LM. Throughout 1955 and early 1956, the 121 LM put both itself and its driver atop the podium on numerous occasions throughout California, proving that while it was never quite up to snuff for longer European races, the shorter races on California street circuits and at airfields were its forte. Unfortunately, disaster struck at Pebble Beach in April of 1956. On lap 33 of the Del Monte Trophy race, Ernie McAfee missed a downshift at turn six, causing him to lose control of his car into the corner, which ended with the 121 LM hitting a pine tree on the driver’s side, killing him on impact. This would be the first death in SCCA racing in Northern California and sent shockwaves through the community; several drivers retired from racing as a result of the death of their friend, and racing at Pebble Beach was banned thereafter. Following the accident, the 121 LM stayed in the hands of Mr.Doheny, who faithfully restored the car over the course of the next two years. The car presently lacks a traditional chassis stamping, believed to be due to the work performed in repairing it for Mr. Doheny. It did and does, however, retain its matching numbers engine with its Le Mans scrutineering stamp, as well as a matching-numbers gearbox.

Thereafter, the 121 LM remained with his family for the following two decades and was raced at the very frst Monterey historic races in 1974 by Doheny’s stepson, Chris Cord. That would be.the 121 LM’s frst and only year at the Monterey historics with Doheny and Chris Cord.
With its next owner, Bill Ziering of Los Angeles, the car would appear at the event a number of times over the following 20 years, as well as at a number of other racing events and even a handful of concours, including the Pebble Beach Concours d’Elegance in 1975 and 1976. Ziering kept the car until 1997, when it was acquired by its current owner, and it has remained on display in his collection. The car has been seldom seen since, with just one outing at the Ferrari North America Historic Challenge at Lime Rock Park in June of 1999, where it was driven by Todd Morici. The concluding sentence of the article on 121 LMs in the fourth issue of Cavallino sums the ethos of the model up best. “Wind and noise are what you’ve paid for. Use it.”