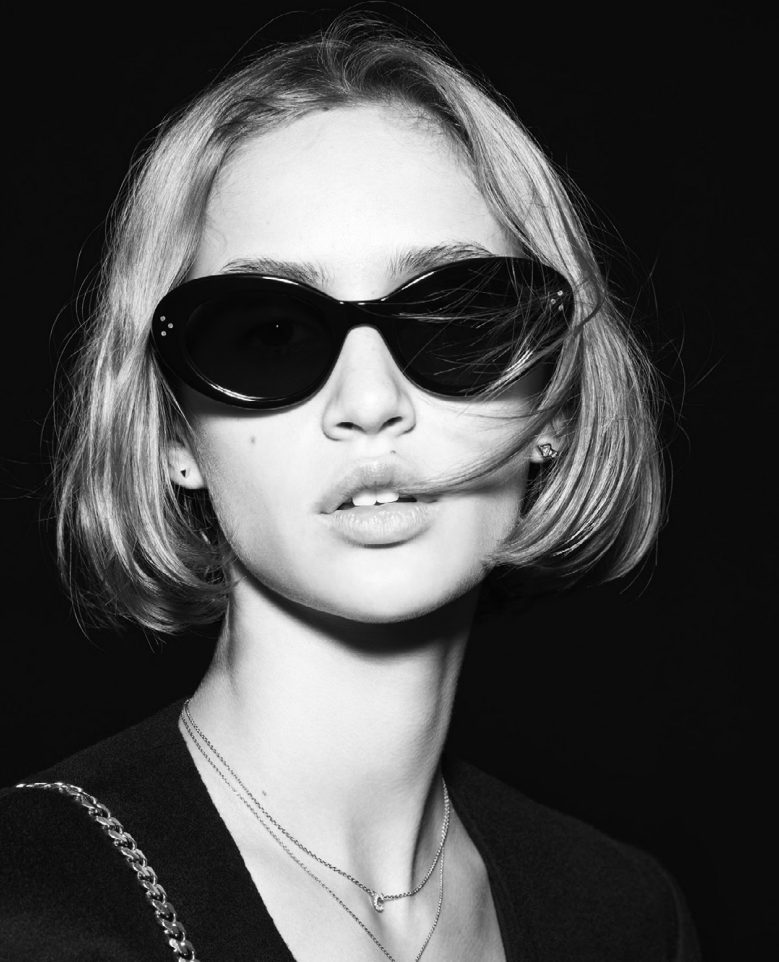 Celine’s womenswear winter 2021 fashion show took place in the André Le Nôtre Gardens of the Chateau De Vaux-Le-Vicomte March 2021. The inspirations for the setting were drawn from the visionary verses of several literary greats of France: “Her gaze is like the gaze of statues” from Paul Verlaine’s “My Familiar Dream”; “My youth has been nothing but a tenebrous storm, pierced now and then by rays of brilliant sunshine” from Charles Baudelaire’s “The Enemy”, and “I alone have the key to this savage parade” from Arthur Rimbaud’s “Parade”. But the greatest inspiration was the location itself. “The gardens of Versailles would not exist were it not for those of Vaux-Le-Vicomte design by André Le Nôtre. They mark the invention of “French Gardens.” The “great century” was foretold insofar as it was born at Vaux-Le-Vicomte in 1656.” Nicolas Fouquet received King Louis XIV on its opening day. The chateau went through several ownerships over the centuries and was acquired, in 1875, by an ancestor of the Vogüé family, who have been restoring it ever since. The collection’s vision, “a utopian parade and melancholic daydream of Celine’s Womenswear Winter 21 campaign was photographed by Hedi Slimane at Amnesia, Privilege and Eden in Ibiza in May 2021 featuring Quinn Elin Mora. youth interrupted“, in some way describes the life of Celine’s Creative Director, Hedi Slimane. Born to an Italian mother and Tunisian father, Slimane discovered photography at the age of 11 when he received his first camera, and he learned black and white darkroom printing.When he was 16, he started making his own clothes, without thinking about entering the fashion industry. He studied Art History at the École du Louvre and completed a tailor apprenticeship at a men’s designer house. He also visited the offices of “Le Monde” newspaper as he considered becoming a journalist and reporter. From 1992 to 1995, Slimane assisted fashion consultant Jean-Jacques Picart on the centenary of the project “monogram canvas” of Louis Vuitton. And in 1996, Pierre Bergé appointed Slimane as Yves Saint Laurent’s men’s ready-to-wearn director, and later became artistic director. After the Black Tie collection for autumn-winter 2000, which foreshadowed the advent of Slimane’s silhouette, and the debuts of “skinny,” he chose to leave YSL, declined the offer of creative directorship at Jil Sander, and accepted the position of creative director for menswear at Christian Dior. In 2002, Hedi Slimane was the first menswear designer to receive the CFDA award for International Designer. In January 2018, LVMH announced that Slimane would take on the role of creative director at Celine.
The Celine’s womenswear winter campaign, shot by Slimane, is a reminder of his first love: photography, which he never gave up throughout the years working with art curators, publishers and artists. He still shoots for magazines and continues to be active in the photography scene.