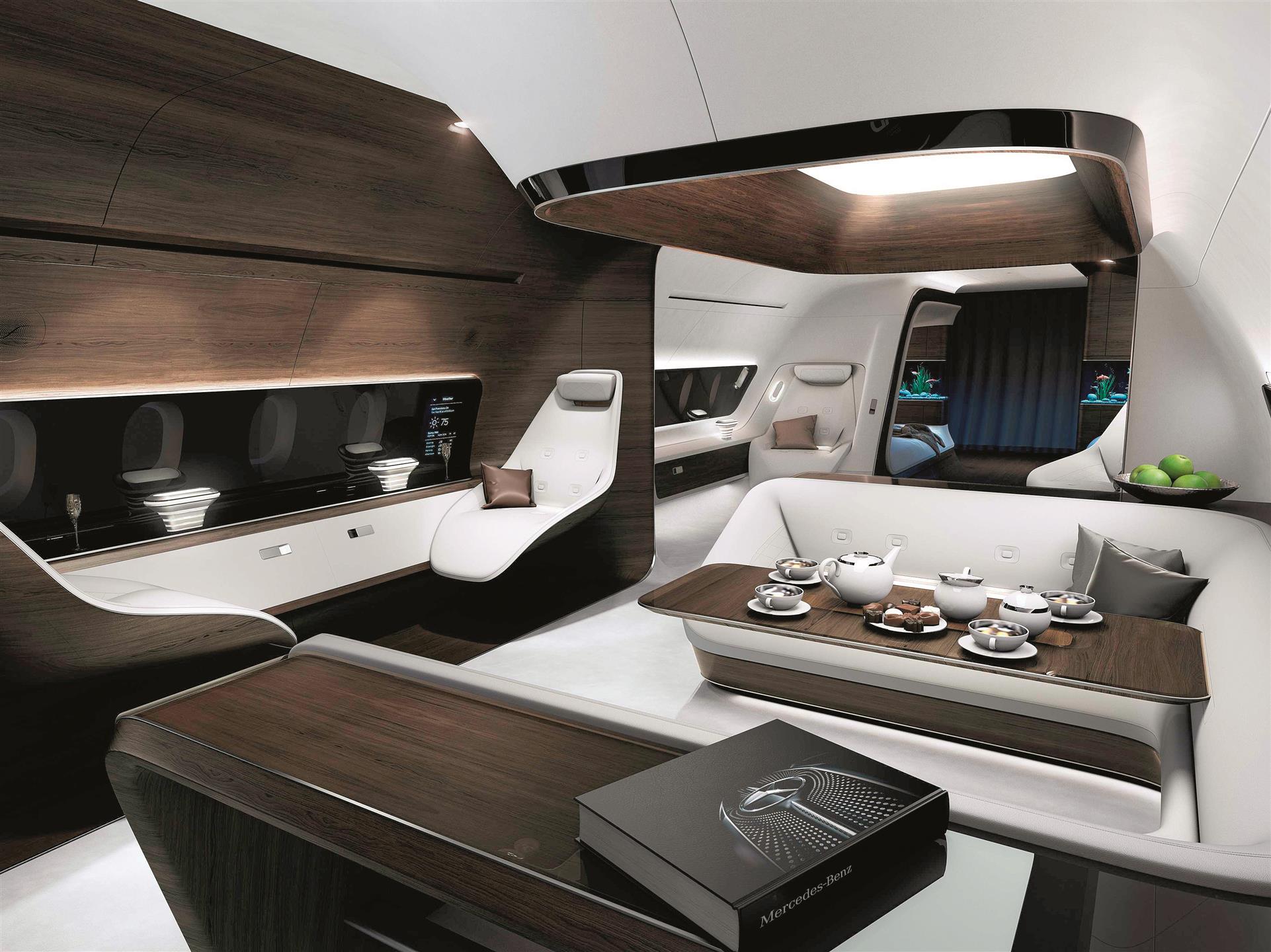 Lufthansa has one of the most famous airlines in Europe and also a section called Lufthansa Technik, which is engaged in designing interiors for small aircraft and VIP transport means and private clients. They have decided to use Mercedes-Benz, which know a lot about interior design in tight spaces. Its idea was to make this interior became the Mercedes S Class, or Mercedes-Maybach, aircraft.
The collaboration pairs two renowned German companies, and especially helps Mercedes highlight itself beyond its vehicles as a lifestyle brand. By partnering with commercial airlines, Mercedes-Benz is able to reach an elite class of travellers flying their executive jets and this may attract orders from private customers.

“With the yacht and the aircraft cabin we have transferred our philosophy of Sensual Purity to the ship and aircraft design,” said Gorden Wagener, head of design of Daimler AG. “The creation was an inspiring challenge and we have created products that reveal a perfect contemporary luxury – hot and cool.”
The interior design of the cab, eliminating the traditional idea of sectioning the interior of a cabin, creating a spiral design that integrates with large spaces. The Mercedes and Lufthansa cabin is aiming to change the way the space is used through a spiral layout.

The layout resembles a DNA helix as the floor, wall and ceiling flow together and the areas are separated in a continuous manner. Designed for short- and medium-haul aircraft, the cabin adopts a brand new architecture that leaves behind the traditional separation of ceiling, wall and floor typically found in private and commercial jets. The designers explain that the bold new setup creates an increased sense of space for the passengers.

The apartment-sized cabin is designed to make flights as painless as possible. It features hardwood flooring, a sofa, a two-person bed, four individual seats, and a U-shaped bench with a large table in the middle. All of the seating surfaces are upholstered in premium leather, and buyers can further spruce up the cabin by adding a fridge, a flat-screen TV, an aquarium and — for the zen-minded among us — a bonsai tree. Numerous storage compartments are scattered throughout the cabin. The entrance area in the front features a welcoming, open entrée, a kitchen (galley) for live cooking and a séparée as well as a VIP bathroom (lavatory). In the aft part of the cabin a separate entertainment zone has been combined with the en-suite private area.The unique helix structure, a dynamic spiral layout, is the central design theme extending throughout the aircraft from the entrance all the way to the bedroom. This creates new, independent spatial zones without the typical arrangement of lining and wall elements.

Windows concealed by black panels boast touchscreen technology to control the plane’s infotainment system. And just in case the futuristic design isn’t enough to captivate your attention, a glowing blue aquarium is another extravagant touch sure to win over even the most selective flyers.  The VIP aircraft, which could seat 150 passengers in airline configuration, is designed for 16 VIP passengers.