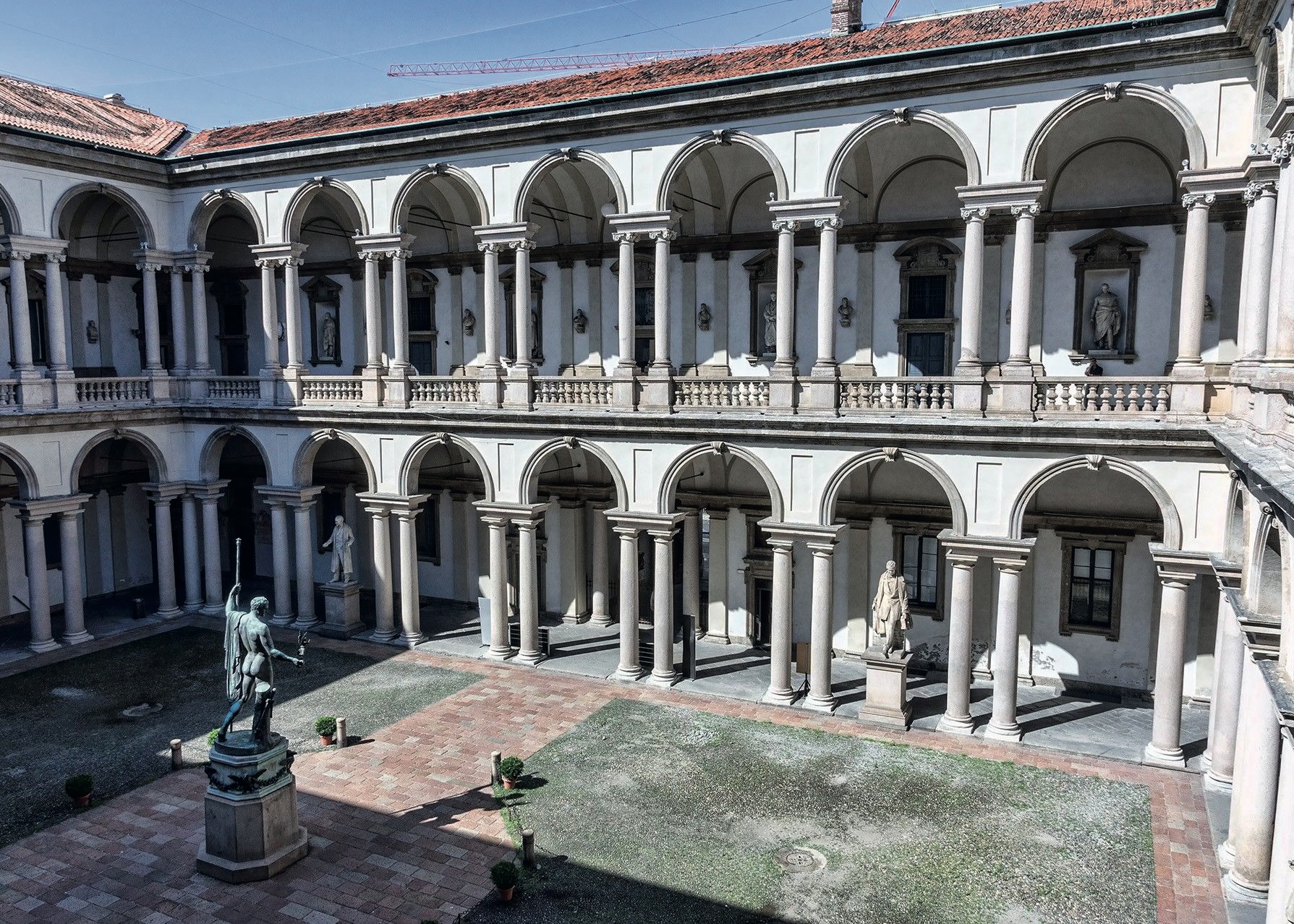 All Under One Baroque Roof

The Brera Gallery was officially established in 1809, even though a first collection with educational purpose existed already from 1776 – and then expanded over the years – alongside the Accademia di Belle Arti. Mary Therese of Austria offered the students the opportunity to study art masterpieces close up. So unlike other important museums in Italy such as the Uffizi, Brera did not start out life as the private collection of a prince or nobleman but as the result of a deliberate policy decision. Paintings confiscated from churches and convents throughout Lombardy with the religious orders’ dissolution began to pour into the museum in the early years of the 19th century, in addition to artworks of similar provenance from other areas of the Kingdom of Italy. This explains why the collection comprises chiefly religious works, many of them large altarpieces, and accounts for Brera’s special aura on which later acquisitions have had only a minor impact. Palazzo Brera was built on the remains of a 14th century monastery of the Umiliati order which was subsequently given to the Jesuits, who founded a school here. Francesco Maria Richini began in the early 17th century to turn it into the solidly austere building we see today. When the Jesuits were disbanded in 1773, the Collegio di Brera became state property and Empress Maria Theresa of
Austria decided to use it to house several of the city’s leading cultural institutes. In addition to the Accademia di Belle Arti and the Istituto Lombardo di Scienze e Lettere, she also assigned the Biblioteca Nazionale Braidense, the Osservatorio Astronomico and the Orto Botanico to her new foundation. The man commissioned to design and execute the work was Giuseppe Piermarini, one of Italy’s leading Neoclassical architects. He was responsible for renovating the library (one room of which can be seen in Room I in the Pinacoteca, or picture gallery), for building the solemn entrance on Via Brera and for completing the courtyard. A bronze statue of Napoleon in the guise of Mars the Peacemaker, cast in Rome to a design by Antonio Canova, was erected in the centre of the courtyard in 1859. Porticos, courtyards, hallways and corridors were chosen throughout the 19th century as settings for monuments publicly celebrating artists, benefactors, humanists and scientists associated with Brera and the Braidense. The best works in this extremely rich and little-known collection include the monuments to Cesare Beccaria by Pompeo Marchesi and to Giuseppe Parini by Gaetano Monti which can be admired on the monumental staircase leading up to the Pinacoteca. Palazzao Brera houses several institutions. Accademia di Brera, one of the oldest such schools in Italy, is a living emblem of the history and the artists that have forged Italian art, making their mark on Italy’s history and contributing to interaction between science, literature and the arts since 1776. The school continues today to play a leading role in the world of cultural creativity with unfagging enthusiasm. Istituto Lombardo Accademia di Scienze e Lettere, founded by Napoleon in 1797, modelling it on the Institut de France, for the purpose of collecting and cataloguing discoveries and of perfecting the arts and sciences. The Orto Botanico di Brera or Brera Botanical Garden, created under Empress Maria Theresa of Austria in 1774, offers visitors a small haven of peace in the heart of the bustling city. It hosts two of the oldest examples of the ginko biloba tree in Europe, a 40 metre lime tree and a Caucasian walnut tree. The Museo Astronomico, or Astronomical Museum, is located here, with a collection of old scientific instruments belonging to the Osservatorio Astronomico. The palazzo is also home to one of the oldest associations in Milan – the Amici di Brera, or Friends of Brera, which promotes the conservation and enhancement of the historic Palazzo di Brera.